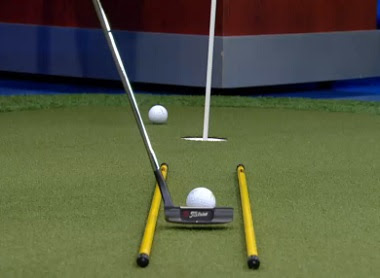 A Rules question for you;
A player may use an alignment aid to practice their putting during a competitive round of golf. True or False?
Now, I would be extremely surprised if more than 2% of you answered, ‘True’ to this question. I am confident that a very large majority of amateur golfers know that they are not permitted to use any kind of artificial device to assist them while they are playing a competitive round of golf. Surprisingly, US PGA Tour player, Jeff Overton, who represented US in the 2010 Ryder Cup, not only did not know this Rule but then blamed an official for not specifically telling him that he was not permitted to use an alignment aid while he was practice putting in the middle of his round!

This is the sequence of events that led to Overton’s disqualification for breaching Rule 14-3 on the third day of the Crowne Plaza Colonial Invitational. As he approached the 10th teeing ground he saw that there was a back-up of players waiting there, due to both the 1st and 10th being used as starting holes, following the weather-suspended second round. Mark Russell, PGA Tour Vice President of Rules and Competition said that Overton asked a starter if he was allowed to practice while he waited for the backup to clear at the 10th tee and he was informed that he could and was allowed to use the nearby practice area. However, from the tweets below, it seems that Overton claims that the conversation about practice was initiated by the starter. The relevant Rule is 7-2, part of which states;
Between the play of two holes a player must not make a practice stroke, except that he may practice putting or chipping on or near:
a. the putting green of the hole last played,
b. any practice putting green, or
c. the teeing ground of the next hole to be played in the round, provided a practice stroke is not made from a hazard and does not unduly delay play (Rule 6-7).
Where Overton went wrong is that he apparently placed an alignment aid on the practice putting green to assist him to line up his putts, presumably of a similar type to the rods in the photo above. This was reported to the Rules officials, not by a TV viewer this time, but apparently by a fellow competitor, though this has not been officially confirmed.

Jeff Overton was aggrieved at his misfortune and like many before him made the questionable decision to use Twitter as the medium to vent his frustration (read from bottom up). 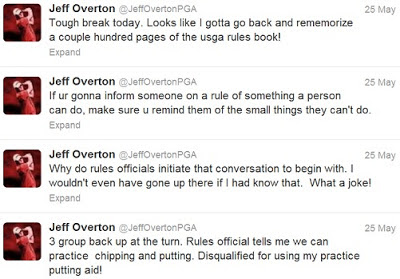 Jeff Overton is not new to golf. He turned Pro in 2005 and qualified for the PGA Tour the following year. He celebrates his 30th birthday today (29th May). Once again I arrive at the conclusion that players should spend more time obtaining a working knowledge of the rules of the game that provides their livelihood. They should also demand that their caddie does the same, so that they can properly fulfill their responsibility of assisting their primary source of income whenever there is a need. They could do worse than to start by subscribing to my free, weekly blog, by entering their email address at the top right of this home page, and my free ‘Rhodes Rules School’ weekly emails on the Rules at this link.